It is no wonder that the Japanese have a deep affection for cherry blossoms (桜, sakura). The delicate pink blossoms only last two weeks of every year, and signify the closure of a chapter and the start of a new beginning.

In Japan, the new year begins in the spring. Spring is when the school year ends and begins, when fresh graduates start their first day of work, and of course, when bare trees suddenly spring back to life with greenery and flower buds, only to lose their petals in a fortnight. 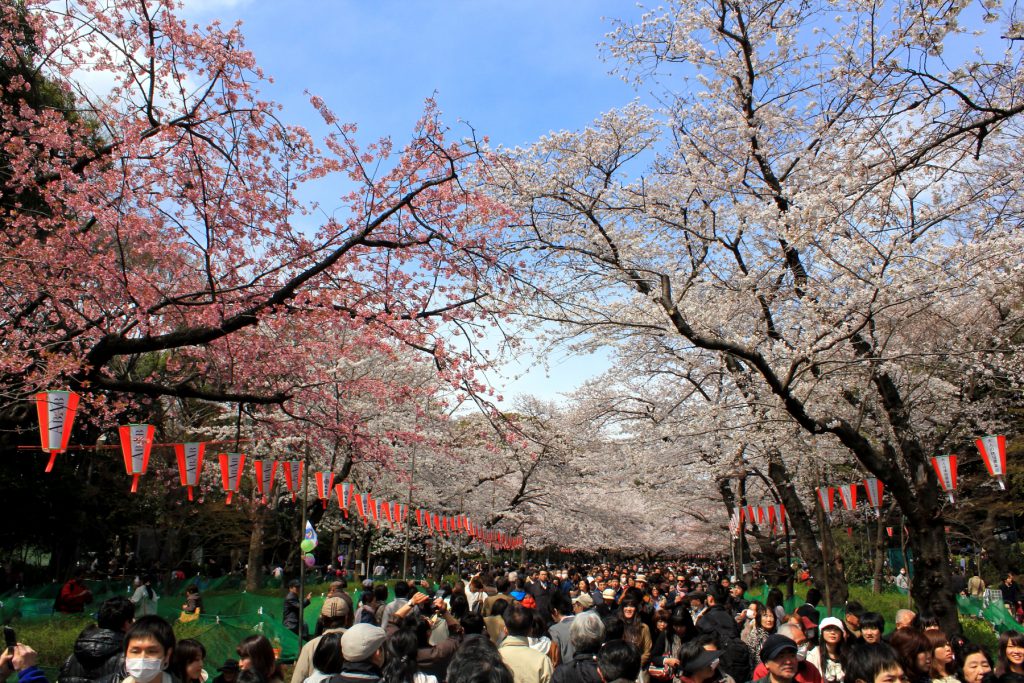 Hanami 花見 (literally “flower viewing”) is a custom of strolling or picnicking during the cherry blossom season. The leisurely pastime actually hails back to the Nara era (710-794 AD) where imperial courtiers would sit under the blossoming trees and compose poetry and engage in other artistic endeavors. The peasant class also celebrated it as part of a religious ceremony to pray for a plentiful rice harvest as they believed that the rice paddy deity resided in the cherry trees. It wasn’t until the Edo era (1603-1868) where the pastime spread among the commoners, where they would picnic and feast in a similar style seen today.

When the custom was first brought over from ancient China, the people would Hanami under plum blossoms (梅の花, ume no hana) but during the Heian era (794-1185), the custom changed to cherry blossom viewing. While technically, one can enjoy Hanami with other flowers, cherry blossoms are the default.

The start of the cherry blossom season differs slightly every year, so the Japan Meteorological Agency monitors and predicts the best timing for Hanami, which is broasted on national television. It’s hard not to see why the annual phenomena is a serious ordeal; the blossoming trees are majestic and yet its beauty is fleeting.

There are many famous and photogenic spots for Hanami, including historic locations and parks but one can easily soak in the vibrant scenery at a local neighborhood spot.

Foods to enjoy at a Hanami

So, what should one bring to a Hanami? There are plenty of foods, desserts and drinks associated with the spring season and depending on the size of the gathering, you can easily scale the portions as necessary. 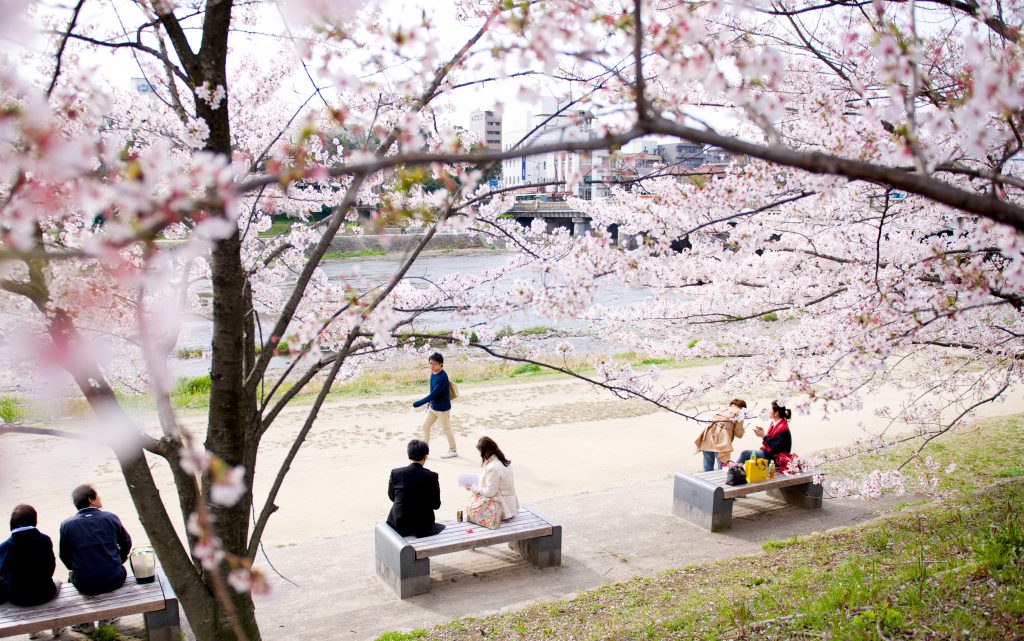 Hanami bento 花見弁当 are bento (packed meal) eaten at a Hanami. They can be prepared at home or be store bought. There are no rules to what defines a Hanami bento, so bring whatever you like! You could pack foods that are easily consumed in an outdoor environment such as Onigiri おにぎり (rice balls), Inari sushi 稲荷寿司 (seasoned tofu pouches stuffed with sushi rice), or sandwiches.

Hanami Dango 花見団子 are tri-color dango (skewered sweet rice dumplings). There are several theories to the color’s symbolism, one theory says that pink symbolises spring, white is winter, and green is summer. Or that the colors symbolize the stages of cherry blossoms; pink are the flower buds, white are the bloomed flowers, and green are the leaves that appear after the blossoms fall.

Hanami sake 花見酒 is drinking alcohol at a Hanami (sake encompasses all alcoholic beverages, and is not limited to rice wine 日本酒). The custom actually dates all the way back to 1598 when the Shogun Toyotomi Hideyoshi held a rowdy party of 1,300 guests at Daigo Temple in Kyoto, where he served the best rice wine from around the country.

While rice wine is the traditional choice, beer is also popular, where breweries release seasonal cans during this time of year with cherry blossom motifs.

There are lots of other spring themed Japanese confectionery, some that use cherry blossoms as an ingredient. There are both traditional and modern desserts to satisfy all sweet tooths. Check out the supermarkets, department stores, or even the konbini for more delectable offerings!

Whether you plan your Hanami with friends and family or by yourself, I hope you savor the transient beauty with some delicious foods!