Growing up in Japan, hearing the KFC (Kentucky Fried Chicken) TV commercial with the KFC Christmas song brings back all the fun childhood memories of the holiday season. However, I didn’t realize eating the fried chicken for Christmas was strange culture until I came to the U.S.

Many Japanese people do eat KFC for Christmas. The popularity is so crazy that Christmas sales reached 7.1 billion yen ($62.5 million) in 2019. The company usually starts Christmas advertisement and take reservations for party packages earlier in the season. You will see lines out the door on Christmas Eve and Christmas day.

Do you celebrate Christmas in Japan?

After world war II, the Japanese economy grew rapidly. So people started to spend more money on leisure. Meanwhile, Japan began implementing many foreign cultures, especially from America, since there are many military bases in the country. So even though Christianity isn’t common in Japan, people learned about Christmas celebrations and started celebrating Christmas by eating cakes and giving out toys. It was treated as a seasonal event to entertain children.

Until the 1950s, people were aware that American people roast a whole turkey for Christmas. There were turkeys shipped from the U.S. for the military stations located in Japan, so naturally, Japanese people tried to do the same. However, the price of turkey was so high, and commonly, Japanese households do not own a large oven like in the U.S., So cooking turkey wasn’t realistic. As a substitute for turkey, roasted chicken was promoted. Yet, chicken back in the 1950s was very expensive too. So it didn’t become very popular.

The usual thing to do in western culture is to enjoy homemade food at home. Fast food like KFC is usually not a choice for Christmas celebrations.  So I see why foreigners think it is abit strange culture. So why KFC become a staple for Christmas in Japan? It goes back over 50 years ago. 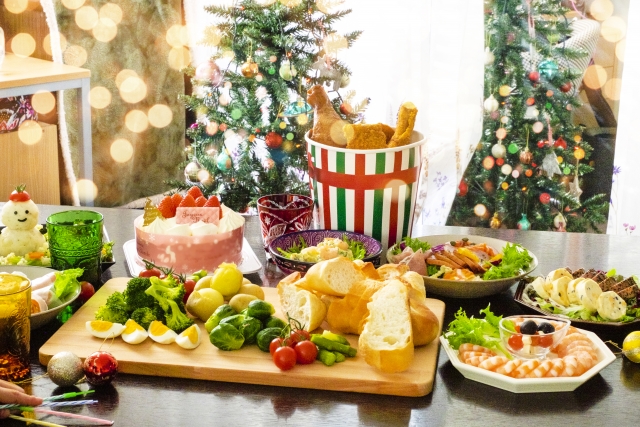 While people didn’t have specific food to celebrate Christmas, the first KFC was introduced in the 1970s. There are a few theories of how KFC became so popular in Japan. One theory is that a Christian school ordered fried chicken for their Christmas event and asked the staff to deliver the order wearing a Santa Clause costume to entertain kids. Since it was such a success, the company saw the business opportunity and pushed the “fried chicken for Christmas’ theme, which became very popular. There are a few other theories, but either way, it was a great marketing strategy that led to this interesting culture in Japan.
If you are in Japan, enjoy Japanese-style Christmas and forget about all the cooking and dishes this year. Happy Holidays!