Green tea has been enjoyed by the Japanese for over a thousand years. Ryokucha (緑茶), literally “green tea” even has its own emoji 🍵!

The green tea plant is the evergreen shrub Camellia Sinensis. All types of tea such as black and fermented teas are from the same plant. What differentiates green tea from the others is its cultivation and processing. The green tea leaves are able to retain that fresh green color and aroma due to a quick process of steaming and drying the leaves immediately after harvest.

The plant is grown across Japan, but the most famous regions are Shizuoka, Kagoshima, and Kyoto. 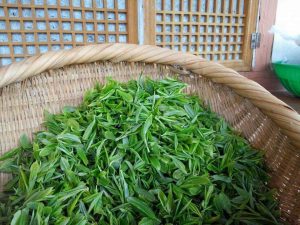 The history of green tea in Japan dates back to the Nara era (710-794) when it was introduced to Japan by Zen Buddhist monks studying in China. However, green tea was highly prized and was only reserved for the nobility.

The widespread drinking of tea is thanks to the monk Eisai (栄西) who brought tea seeds and the knowledge of how cultivate and prepare tea, as well as its various health benefits. He published Kissa Yojoki (喫茶養生記) in 1191, which is the first book that delved into everything about tea and the success of the book led to the widespread popularity of tea culture in Japan. 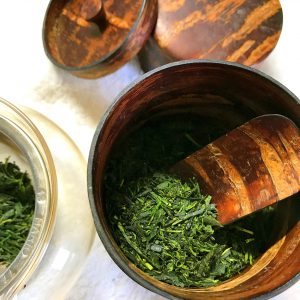 Here are the types of Japanese green tea you may encounter.

Sencha is the most common type of green tea. It refers to the first picking of the tea bush, which takes place between late February to the end of May, depending on the region and climate. Sencha has a characteristic delicate sweetness and a mild astringent. It’s rich in vitamin C and is a great everyday tea.

Fukamushicha or deep steamed green tea, is processed similar to sencha, except the freshly harvested leaves are steamed two to three times longer before being rolled dry, resulting in a darker color, richer fragrance, and bolder flavor. Fukamushicha has a relatively short history as its unique processing methods were developed just over the last century.

Kukicha is a blend of the stems, twigs and stalks discarded during the production of sencha, gyokuro, and matcha. It’s brewed the same way as other types of green tea and has a mildly nutty and slightly creamy sweet flavor.

Gyokuro, literally “jade dew,” is top tiered green tea. It’s a laborious process to make it as the plant is shielded from direct sunlight three to four weeks before picking, resulting in dark green leaves when dried. This results in a concentrated flavor and contains high amounts of caffeine and chlorophyll.

Matcha is powdered green tea traditionally used in Japanese tea ceremonies. Like gyokuro, the leaves are shade brown and when harvested, the leaves are steamed then dried but not rolled, unlike other types of green tea. The leaf veins and stems are removed, leaving only the leaves to be finely ground in a mill. It has a rich earthy flavor and vivid green hue.

Tencha (甜茶) refers to the leaves in unpowdered form.

For nutty and toasty tea, try genmaicha “brown rice tea.” It consists of medium grade sencha with roasted popped brown rice. It’s also lower in caffeine than the others and has a straw yellow color.

Although a type of green tea, hojicha is not green but has a reddish dark brown color. It’s made by roasted bancha or sencha over high heat. It contains relatively little caffeine and tannins, which is why it’s often served after meals.