the ancient food of the samurais

When one thinks of Japan, one conjures up images of delightful healthy foods like sushi and sashimi, accompanied with intricately designed chopsticks. The common nutritious soup, miso soup, takes a back seat in peoples’ minds. Despite this, it is hard to deny that this soybean soup has an important place in Japanese society. This soup is ubiquitous, having found its way into approximately 90% of Japanese households, where it is served alongside other foods, mostly as a side-dish for breakfast, lunch, and dinner. Around 75% of Japanese people eat miso soup at least once a day. Let us dive into the rich culinary history of the Japanese traditional miso soup. 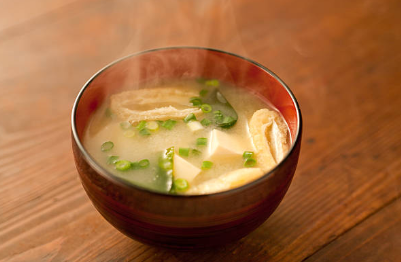 The origins of the miso soup are debatable – some say it originated from China and subsequently spread to Japan and South Korea.  Since it arrived in Japan, miso soup has been an evolving quintessential side dish in Japanese cuisine. It is said to have evolved from food rations for samurais in the Muromachi period (1336 – 1573). During the civil wars in Japan, the samurais carried a small packet of grounded miso and added it to water as a meal.

For many years, miso paste remained the most important ingredient in the Japanese household. At the end of the 18th century, it was briefly replaced by soy sauce. However, two-hundred years later, it is beginning to gain currency once again and find its way back into Japanese homes.

Miso soup is served as a side dish with all kinds of Japanese cuisine. Even though it is never served as the main dish, it works to complement the other foods. Miso paste is made from fermented soybeans mixed with salt and koji fungus (aspergillus oryzae). The paste has a similar colour to peanut butter. When mixed into a soup, it is said to be a vegan’s delight as common ingredients are tofu, scallions, wakame seaweed, leafy greens and mushrooms. For a non-vegan soup, common ingredients are dashi, a fish-based stock of kombu (dried kelp) and bonito flakes. Traditional miso soup also used fermented bonito or skipjack tuna shavings. Potatoes, carrots and radish are also added depending upon the region. 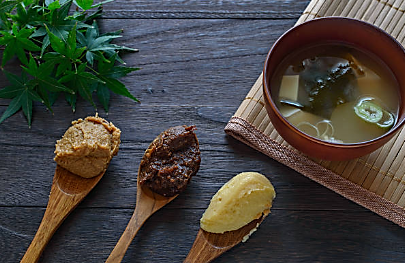 Miso soup increases the value of good gut bacteria. People who have high blood pressure are encouraged to drink miso soup as it enables the salt to be released from the kidneys, thereby improving blood circulation in the arteries. It is nutritionally well-balanced and aids in digestion, promoting longevity of life. Some people say that miso soup is one of the reasons that Japanese people live so long.

These days, as people’s lives become busier and less time can be spent preparing meals, many traditional foods have transformed themselves to be easier and more convenient in order to keep up with the trend. Miso soup is one of these, coming in instant or freeze-dried forms. In this way, a food with an ancient history can still be enjoyed by many centuries later.

I am Jeru, 30 years old and I come from the south of India – Hyderabad. I am still discovering Japan and I find it to not only be a peaceful place for the mind but also enjoying its wonderful delicacies. I love to sample new foods and I enjoy eating, reading and going out (solely in this order). This is my first time in Japan and I do not regret coming here as I enjoy the sights, tastes, and smells of this wonderful poetic country. I hope to be able to create something new and pursue my passion here with tenacity. Growing up in India has made me love food and I enjoy cooking by being a sous chef! Thank you, Japan, for making me fall in love with you. Your beautiful sunrise is what I enjoy waking up to the most.