New Year or oshōgatsu is one of the most important holidays of the year. It has a lot of traditions and rituals associated with it, many of which are related to the food menu, which has plenty of symbolism.

Housewives in Japan spend the last days of the year cooking and preparing food for the first three days of the year. Traditionally, it was considered to be a taboo to cook during New Year, but the reason behind this is that supermarkets are closed during these days, so it is not possible to get fresh food. For that reason Japanese people started making osechi ryōri (御節料理), a precooked meal that you can preserve for a couple of days and can be consumed at room temperature. Osechi-ryōri is presented in jūbako (重箱), which looks similar to a fancy bentō box.  As usual in Japanese cuisine, the visual appearance and harmony between colours is a must when preparing and distributing osechi food. In addition, there is a predetermined order to place the food in the jūbako box, and every element has symbolism. 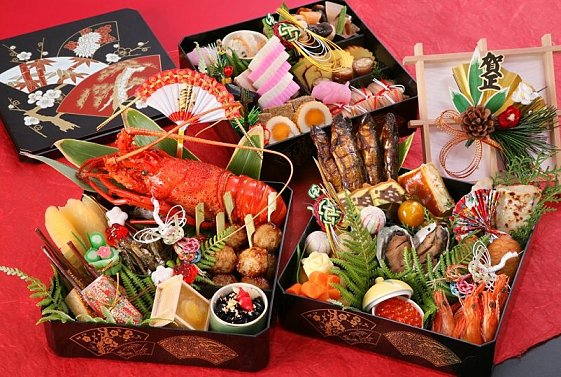 Firstly, on the upper layer (ichi no jū) there are snacks such as kuromame beans, kazunoko beans, tazukuri sardines, etc. On the second layer (ni no jū), you will find starters such as chestnut paste and kurikinton sweet potatoes; a datemaki omelette, kamaboko fish paste cakes, etc. On the third layer (san no jū), there is roasted fish. On the fourth layer (yo no jū), you will find vegetables. Finally, the fifth layer is empty, which symbolizes prosperity for the future.

As mentioned previously, traditionally housewives were the ones preparing all these elements for the whole family to eat over three days. That means a lot of work and that’s why also during New Year they take a break from cooking. Today, however, the vast majority of families reserve and buy ready-made osechi ryōri boxes in department stores. In general, they are not cheap and naturally, the better the supermarket or the responsible chef, the more expensive they will be. Of course, there are versions of these jūbaku with fewer layers that are more affordable to the general public and that you can order in the convenience stores. 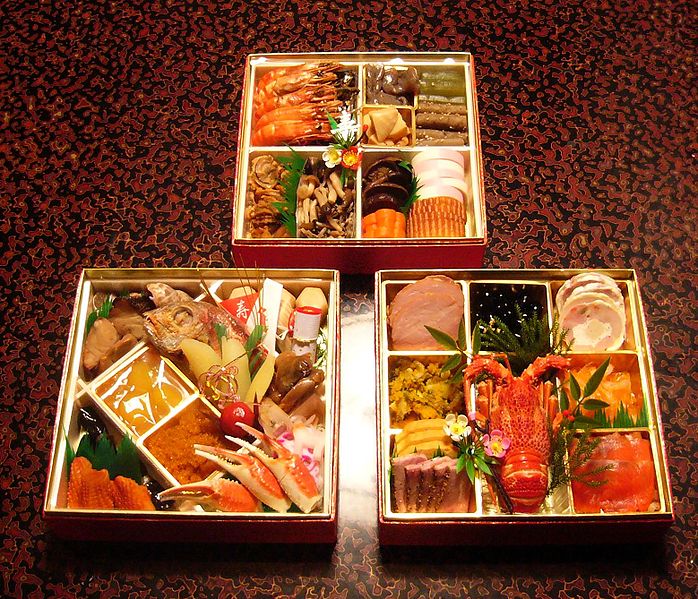 The vast majority of ingredients presented in the osechi box have a very particular meaning and usually represent health, good fortune and prosperity. Although the basic ingredients are common among the different areas of the country, regional areas may differ in terms of flavours, sweetness or saltiness, according to the preferences of the locals.

Some examples of ingredients in osechi-ryōri and their meaning (often conveyed through homophones) are datemaki (伊達巻き), a sweet rolled omelette mixed with fish paste or mashed shrimp, symbolising good fortune in scholarship due to its scroll-like shape; kōhaku kamaboko (紅白かまぼこ), a type of red and white fish cake, used for its colours representing good luck; renkon (蓮根) lotus root, which symbolizes a clear future when you look through the lotus root holes; ebi (海老) shrimp, which is a symbol of longevity due to its curved body; and kinpira gobō (金平ゴボウ), burdock root which is characterised by its firm roots, symbolising a stable household.

Look out for these foods during next year’s oshōgatsu!

My name is Irene Comas Chércoles and I am from Mallorca, Spain. I like to define myself as an adventurous girl not afraid of borders. I studied Asian and African Studies with a specialization in Japan. Thanks to a scholarship for students granted by the Japanese government, I was living and studying a year in Kagoshima in 2014. In the future, I would like to work in building stronger relations between Spain and Japan, and that’s why I was working at Japan Foundation Madrid for almost two years, trying to bring closer the Japanese language and culture to the Spanish people. I also worked sporadically for the Japan National Tourism Office in Madrid to make known Japan as a tourist destination and especially to promote other tourist resorts different from the overexploited cities of Tokyo and Kyoto. After these experiences I decided to focus my career in something related to tourism in Japan (tourism revitalization and sustainable tourism) and relations between the Japanese and Spanish people; trying to bring these two countries closer thanks to the mutual knowledge of their respective people and cultures.