The thick, hot, and humid summer weather is finally ending. During the summer months in Japan, many people lose their appetite due to the weather. All we wanted to eat was something cold and light, such as Somen.
Now the sun feels less intense on your skin, humidity is subsiding, and the air is cooling down; we are getting our appetite back. What’s even better is that it is the harvest season! So many delicious fruits and vegetables are on the market. It is such an exciting season for food lovers.
One of the most popular and famous foods representing Japanese autumn food is Sanma (秋刀魚). So let’s learn more about Sanma, which is currently Shun (旬: meaning “in season”) in Japan. 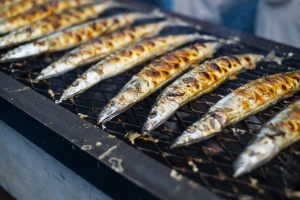 Sanma is a small marine fish also known as pacific saury or mackerel pike in English. It represents Autumn so much that the letters literally mean Autumn (秋), sword (刀), and fish (魚).

Why is Sanma considered an Autumn food?

Sanma usually lives in the northern part of the pacific ocean. When they are in the spawning season, they start to travel south to lay eggs in the warmer climate. They are usually seen in Hokkaido around the end of August. Then travel along the Sanriku coast (三陸沖), the northern part of the main island on the pacific side, between September through October. The warm and cold currents collide in this area, providing more food for Sanma, and resulting in higher fat content and flavors. Thus Sanma is considered in season in Autumn.

How to choose Sanma in the market?

You should get as fresh as possible when you purchase fish. Sanma is one of the easiest fish to tell its freshness in the market.
On top of the three points listed above, look for a plump-bellied one for higher fat content.

What is the best way to eat Sanma?

There are many delicious ways to eat Sanma: Sushi, Sashimi, Teriyaki, Nitsuke (simmered in soy sauce-based broth), fried…etc. But the best way is Shioyaki (塩焼き). Shio (塩) means salt, and Yaki (焼き) means grill. So simply season Sanma with salt and grill, preferably over charcoal. Slow grilling at low temperatures is the best way to cook Sanma. It results in very crispy skin and juicy meat inside. It pairs well with Oroshi Daikon (おろし大根: grated Daikon radish), a splash of soy sauce, and freshly steamed rice which is also in season.
There are many more food in season right now. Check out some articles to explore more autumn foods!