Shirako (白子, “white child”) is fish’s milt, or sperm sacs. The Japanese eat the milt of cod, anglerfish, blowfish, and salmon. It’s eaten raw and cooked and is considered a delicacy in Japan. It has a milky, creamy, velvety texture, similar to oysters or runny cream cheese. It’s also seasonal and can only be found during the winter months of December to February, reaching peak flavor in January.

Milt is also eaten in other parts of the world and is not just a specialty of Japan. Like ikura (salmon roe) and uni (sea urchin gonads), it’s an acquired taste but is high in protein and vitamin B12 and low in fat and carbohydrates. It’s believed to be good for the skin and has anti-aging properties.
Ready to explore shirako? Here are some of the ways you can try shirako.

The most traditional and straightforward way of trying shirako is raw shirako drizzled with ponzu (a citrusy and umami-rich soy sauce). It may include wakame seaweed, grated daikon, finely chopped scallions, or shiso leaves. You may find this dish served at Japanese restaurants and sushi shops. Shirako is also eaten as sushi. As it can get messy, it’s usually served like ikura sushi; a mound of sushi wrapped in nori seaweed with the shirako on top. This style of sushi is called gunkan-maki (軍艦巻き, “battleship roll”).

Try grilled shirako, which intensifies the creamy and pudding-like texture with an added charcoal flavor. 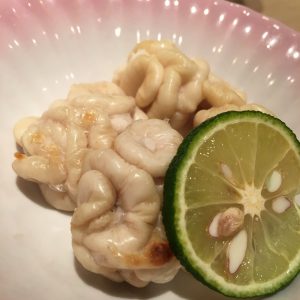 Try shirako tempura, where the exterior is light and crunchy from deep-frying, but the inside retains that creaminess. Eat with salt or tsuyu (つゆ, umami-rich dipping sauce).

Chawanmushi refers to savory steamed egg custard featuring chopped vegetables and protein. It’s eaten at both high-end restaurants and home. You can add shirako into the chawanmushi mixture before steaming it.

A bit morbid if you think of it as a father-son collab, but this is a winter-only hot pot featuring cod, shirako, and other veggies in a light broth. In Japanese, this hot pot is called tara-chiri-nabe (chiri-nabe ちり鍋 refers to a hot pot with white fish, tofu, and vegetables).