The new years holiday in Japan is a special time of year for the Japanese for families and relatives to return to their hometown and get together, much like Christmas or Thanksgiving abroad. The foods eaten are rich in symbolic meaning to pray for a healthy, happy, and prosperous new year.
While traditionally, the new year’s feast was cooked at home, in recent years many have outsourced the laborious cooking and opted to buy instead to ease the task. Regardless of whether you make from scratch or rely on store bought, it’s a festive and quiet time spent with the family. Here are some of the new year’s foods eaten at this time of year.

Toshikoshi soba “new years even soba” are soba noodles eaten on December 31st. It’s a ritual that dates back to the Edo era (1603-1867), where the Japanese would eat a bowl of soba noodles to break off from the previous year and pray for longevity just as long as the noodles. There’s symbolic significance in the soba plant itself is a resilient crop.
Soba shops are especially busy on the 31st, so make sure you plan ahead with your soba slurping. There’s no set time on when to eat toshikoshi soba, but some eat their soba right before midnight before heading off to the temple or shrine to pray. 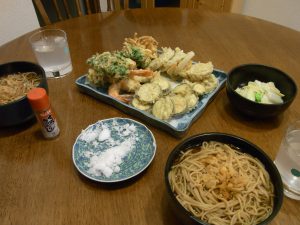 Another food rich in meaning, osechi ryori is a multi-tiered meal packed in a lacquered square box called jyubako (重箱) or oju (お重). Each dish has a special meaning celebrating the new years and it can be quite the task to cook each individual dish!
Osechi ryori tends to be a little heavy on the salt and sugar as originally, the meal was eaten during the first three days of the new year as the holidays were for resting and using heat during this time was considered taboo. Nowadays, most people just eat osechi for a meal or two and revert back to the normal meal.
Here are just a few of the dishes in osechi ryori.

sweet rolled omelet that’s shaped like a scroll. As scrolls were historically used to record knowledge, the hope is that by eating datemaki, you will ensure a year full of learning.

prawns simmered in soy sauce, dashi and sake. It symbolizes longevity, as seen in the shrimp’s bent back and long antennae that looks like a beard.

herring roe. Symbolizes a wish for healthy children and the prosperity of future generations.

lightly pickled julienned daikon and carrots. The colors red and white are auspicious for the Japanese.

candied chestnuts in a sweetened sweet potato paste. It symbolizes fortune and wealth, as seen in the golden yellow color.

broiled sea bream. It’s a popular dish at auspicious events as the name is associated with the word “medetai” (auspicious, joyful).

pounded burdock root. As burdock root grows straight down into the ground, it symbolizes stability for the home and family. 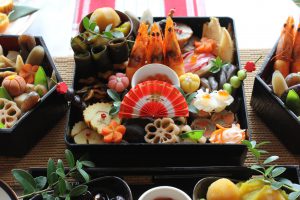 Ozoni is a mochi soup that’s eaten along with osechi ryori. There are regional differences to this soup, such as the shape of the mochi, whether the mochi is toasted or not, the ingredients in addition to the mochi, and the soup base.
In Hokkaido (the northern island of Japan), the mochi is square and is cooked in the broth. The broth is chicken-soy sauce stock and has chicken, naruto (a type of fish cake), onions and carrots.
In Kanto (where Tokyo is located), the mochi is toasted and the broth is a clear dashi broth with blanched greens such as komatsuna or spinach, kamaboko, and a protein such as duck or chicken.
In Kansai (where Kyoto and Osaka are located), the mochi is round and is boiled in the soup, and the soup base is a sweet white miso. It’s a hearty soup that contains yams, daikon, tofu, and Kyoto-style carrot. 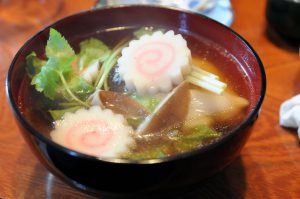