Have you explored the delicious offerings at Japanese bakeries? Affectionately called Pan-ya-san (パン屋さん), you’re bound to find a few tucked in your neighborhood or at the nearby train station. There are old school shops, domestic and international chain stores, in-store bakeries at supermarkets, as well as artisanal boulangeries. 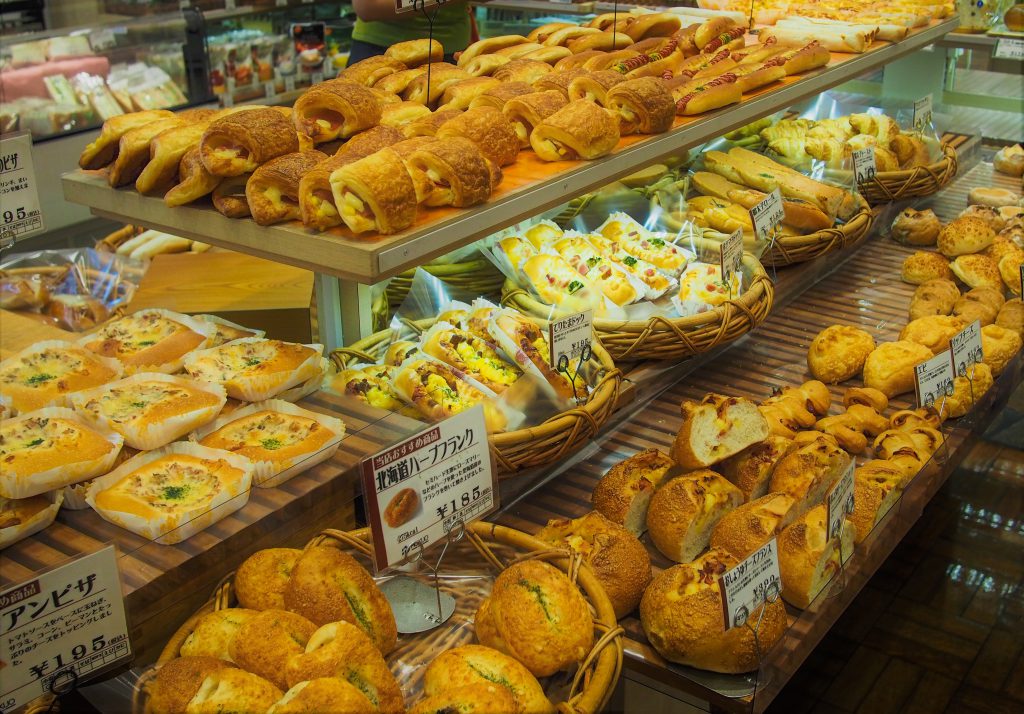 In fact, there are over 10,000 bakeries in Japan and the average Japanese household spends more on bread than rice! Even though Japan is a traditionally rice consuming country, bread is increasingly becoming part of the national diet. It’s not an understatement to say that bakeries have an ubiquitous presence across the country.

What makes Japanese bakeries unique is that the bread has evolved over time to suit the taste and demands of the Japanese. The bread found in Japan has morphed into something different from its European origins.

So, what are the uniquely Japanese baked goods you may encounter? Pick up a tray and tongs and let’s begin!

*Pan パン derives from the Portuguese word “pão” (bread). Bread was first introduced to the Japanese by Portuguese traders and missionaries in the mid 16th century.

Shokupan is Japanese milk bread that’s more pillowy soft and tender than the white bread found in the west. It’s a breakfast staple found at most bakeries. You can choose the thickness of the slices to your preference, four or five per loaf or more.

Anpan is a sweet roll with a red bean paste filling. It dates back to 1874, when former samurai Kimura Yasubei developed a bread dough made with a sakadane liquid yeast (derived from sake) and filled it with red bean paste traditionally used in Japanese confectionery. It’s a timeless favorite beloved by many generations. You can buy the original anpan at the Kimuraya Sohonten in Ginza. 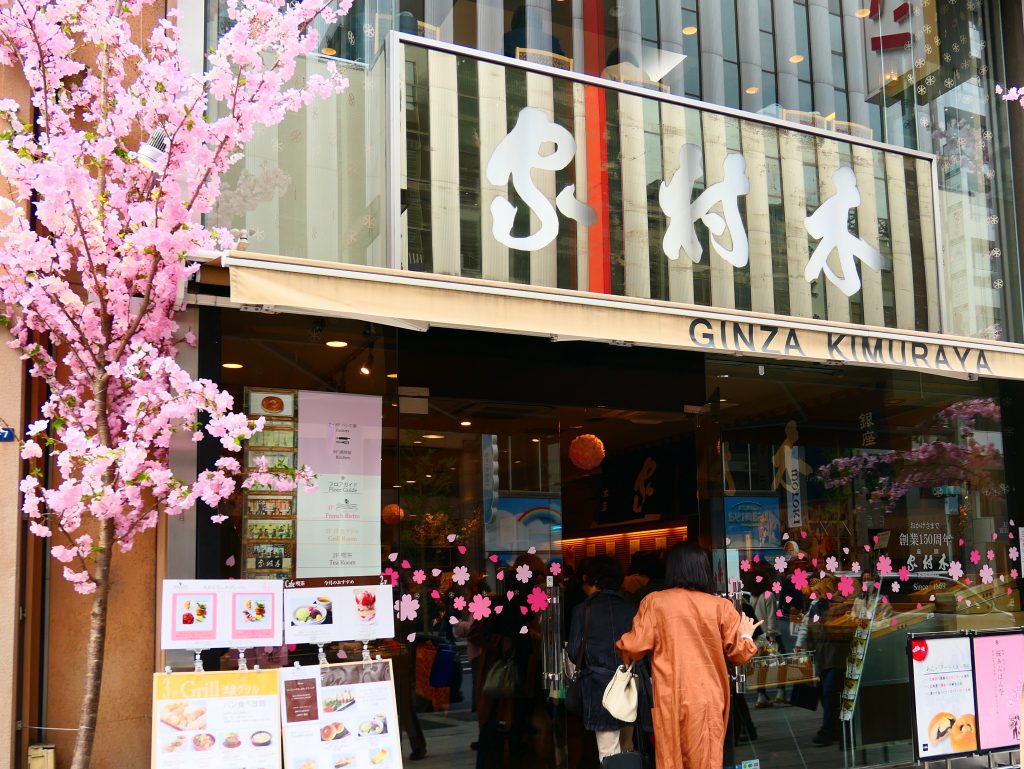 A sweet roll with a custard cream filling with slits that resembles a glove. Another bread with an interesting backstory, it was created by Souma Aizo in 1904, who would later found the food conglomerate Nakamura-ya. He had an epiphany when biting into an oozy cream puff and developed the bread version that has become another classic favorite.

Despite its name, there’s no melon involved in meron pan! The sweet bun’s name derives from its resemblance to melons, as seen in the cross-hatch cookie shell. However, some creative bakeries flavor the dough with melon essence, add chocolate chips or fill it with whipped cream or custard cream. Meron pan was developed in 1910 by Hovhannes Sagoyan, an Armenian baker who was scouted and immigrated to Japan.

An oval shaped sweet bun filled with jam, originally with apricot or strawberry jam. It was developed in 1900 by the third owner of Kimura Sohonten.

A deep fried savory bread with a Japanese curry filling. It has a characteristic crunchy exterior due to the breadcrumb coating and filled with the thick, brown and mildly spicy Japanese curry. There are several contested theories to its origins, but it can be traced back to 1927.

Can’t choose between Yakisoba (fried noodles) or bread? Well, why not have both? Yakisoba pan is the best of both worlds, where Japanese fried noodles are stuffed in a hot dog bun, perhaps the perfect portable carbo-loading offering at bakeries.

A sweet roll with a distinctive cone shape that’s filled with custard, chocolate cream, whipped cream, or some sweet filling. The name originates from the Italian “corno” meaning “horn,” referring to its spiral shape.

If you’re seeking a hearty sandwich, katsu sando is the way to go! This sandwich features breaded and deep fried pork cutlets, accompanied with a smear of fruity brown sauce. It’s cut into two or three long rectangles for easy eating. It was developed in 1953 by a tonkatsu shop in Ueno called Isen to serve hungry geisha seeking a quick bite without ruining their makeup.

Another protein rich sandwich, tamago sando is filled with mashed boiled eggs seasoned with sweet Japanese mayonnaise. There are some versions that sandwich an egg omelette or add lettuce or other leafy greens.

Not all sandwiches are savory! Enter furutsu sando, sandwiches featuring fruit and whipped cream. These instagrammable sandwiches hail back to 1868 by the luxury fruit store Senbikiya Sohonten in Nihonbashi where leftover scraps of fruit were assembled as sandwich fillers. Nowadays, these sandwiches are highly sought out, and bakeries use the highest quality and seasonal fruits. 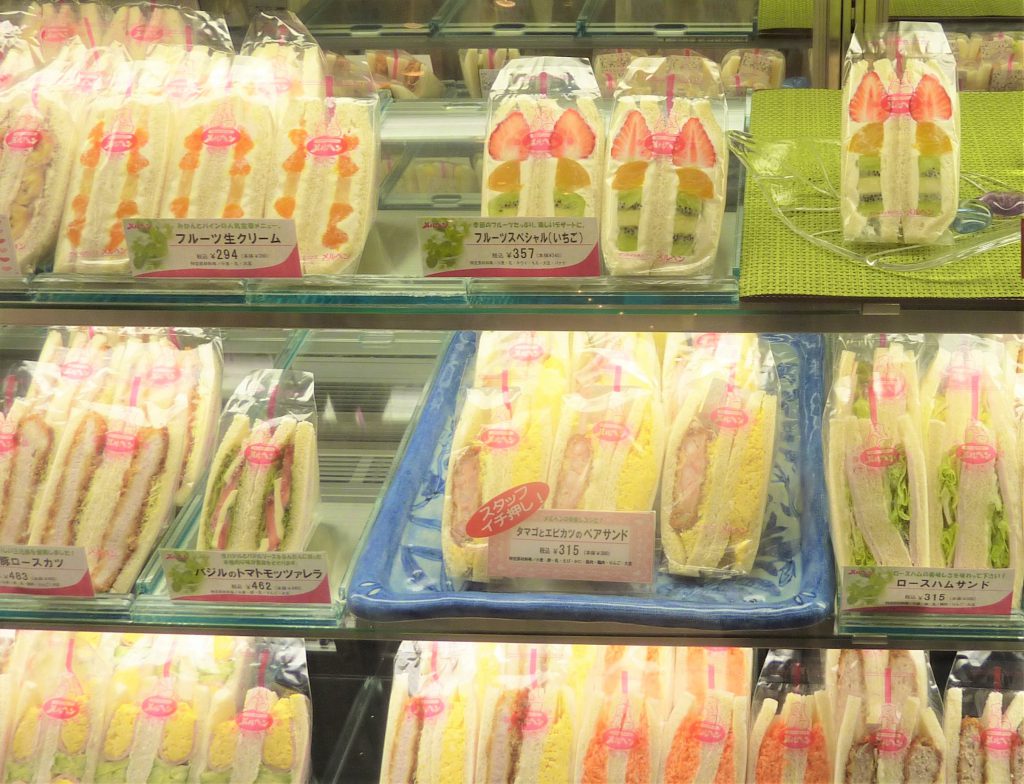 This was just a small sample of the vast selections you may find at a Japanese bakery. There’s a lot more, which may feature seasonal and local ingredients as well as current trends. Some are shaped into animals and characters, too cute to eat! Hope you enjoy hunting for your favorite Japanese bread!